Let’s get one thing straight: the Gucci collection shown Thursday morning, the one peppered with Balenciaga creative honcho’s Demna Gvasalia’s silhouettes, power shoulders, and logo? It was not a collaboration. Instead, the house said it was a product of creative director Alessandro Michele’s “hack lab”—a theoretical place Michele has frolicked in before, where he pulls together wild references from different places and times and refashions them into contemporary cultural statements. This isn’t just a buzzy term: he used his obsession with Renaissance painting to kickstart the gender fluid fashion phenomenon. The “homage” or “reference” is perhaps the leading fashion trick of our time, but only Michele bundles them together to lasso the Gucci bubble to much bigger cultural changes.

The “hack lab” is the kind of classic Michele-ism that raises more questions than it answers—but it also resulted in probably the weirdest, most magically nonsensical thing we’ve seen in fashion since Gvasalia and Michele first came on the scene and changed the way nearly everyone in the entire world dresses.

A look from Balenciaga’s Spring 2017 show…

…and an interpretation from today’s Gucci bonanza.

Courtesy of Gregoire Avenel for Gucci

To back up a bit: all this week, the fashion world has been chattering about the rumor that the Gucci show scheduled for Thursday, titled Aria, would be a collaboration between the Italian mega-brand and its sibling under the Kering conglomerate, Balenciaga. This was a real head-scratcher, seemingly without precedent and difficult even to imagine—like siblings dating or twins switching clothes. It’s not quite like Supreme collaborating with Louis Vuitton back in 2017, in which a super street brand and a super fashion brand had a kind of royal wedding (and which marked the official anointment of streetwear into the high-fashion fold). Nor would it be like Dries Van Noten dipping into the Christian Lacroix archives for his Spring 2020 women’s collection. Balenciaga creative honcho Demna Gvasalia is known for his bizarre collaborations—at Vetements, he once collaborated with 11 brands in one show, and he has put “Kering” logos all over a Balenciaga collection—but in those instances, Gvasalia always had the upper hand, as the high-fashion disruptive force putting mall brands and dad brands alike into new context. Would this be like Miuccia Prada and Raf Simons co-designing Prada? Or something else entirely?

Of course, the hack looked like none of the above. “Aria” began with a model in a red velvet suit (a nod to Tom Ford’s Gucci tenure) entering a club called Savoy, named after the hotel where founder Guccio Gucci first fell in love with leather (luggage, you pervs!). Suddenly he appeared on a camera-lined runway—the aforementioned “hack lab.” A few looks later, the glorious chaos began: a model in a pair of those Balenciaga legging-boots, with the stretchy ruched ice skater top just as we first saw them in Balenciaga Spring 2017…but with the green and red Gucci stripe, and the boots covered with Gucci logos. A few looks later, there was that unmistakable lurching Balenciaga shoulder, but in a horsey Gucci color palette. Then some Balenciaga florals, but carrying the name “Gucci.” The classic Gucci Jackie bag—printed with “Balenciaga.” Gvasalia’s masterful hourglass suit jacket—in the Gucci rhombus design. Balenciaga’s asymmetrically-fastened coat from Fall 2017, in a racing-stripe colorway.

Courtesy of Gregoire Avenel for Gucci

These were the greatest hits of Gvasalia’s Balenciaga—but Gucci-fied. It was indeed less a collaboration than a mindfuck, in the best possible way. As Michele put it in a video that was shared to Instagram a few hours before the show, “In any great saga, no one knows what is real and what is not.” (His good friend Jared Leto said, in another video, “People are going to lose their minds!” He was right!) They were like fashion deepfakes: some mad scientist has made my Gucci behave like Balenciaga!!! 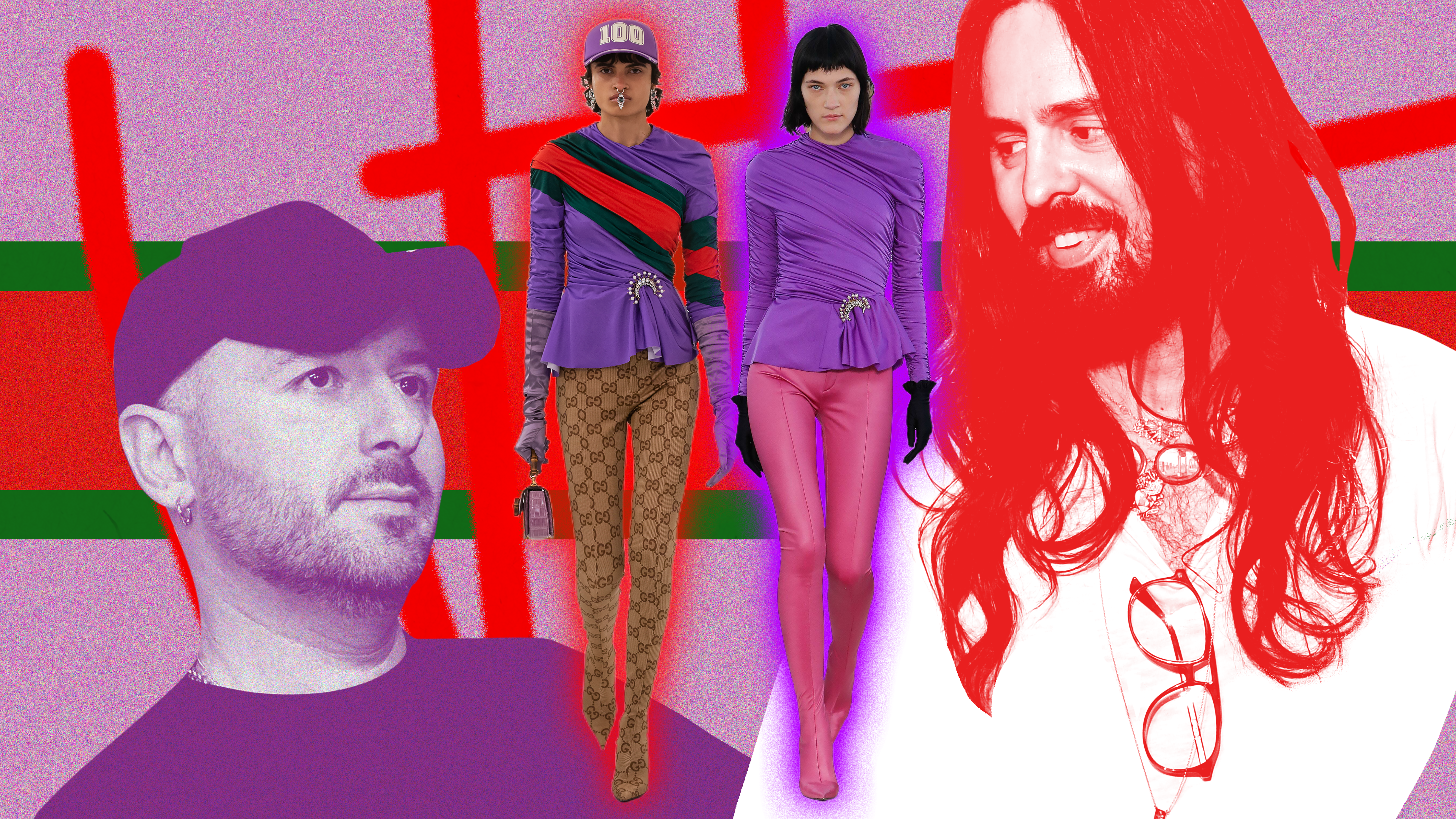