The single best thing about this watch: I guess it depends on how you feel about the Marvel movie franchise. Martin Scorsese, look away.

The backstory: Last month, Audemars Piguet—the brand behind the beloved Royal Oak and collaborations with LeBron James and Jay-Z—teased a collaboration with Marvel. Now, we know the first piece in what will be an ongoing partnership is a Black Panther-themed timepiece that puts a full figurine of the superhero front and center. Alongside the release of the already limited-edition piece came a one-of-one (piece unique, in watch parlance) version of the watch in white gold. That watch was auctioned off this weekend at an event hosted by Kevin Hart; LeBron James and Serena Williams were in attendance. The final sale price? A casual $5.2 million.

Black Panther superfans without $5.2 million laying around, don’t despair. Audemars is releasing 250 pieces of the standard version featuring a titanium case and ceramic bezel in place of white gold. It’s no vibranium, but it should still do the trick. Compared to the $5.2 million unique piece, the standard edition costs a relatively reasonable $162,000. A representative for the brand says there is “VERY limited availability at this point,” so hopefully you have super speed to make it to your local AP boutique.

This watch matters in the world of watches because: Audemars Piguet has made its bones taking chances like this Marvel collaboration. It can be hard to wrap your head around the idea of someone paying more than 100 grand for a superhero watch—it feels more Swatch than haute horology. However, that’s exactly the sort of skepticism that was levied at AP when it released collaborations with Jay-Z and LeBron James—and both of those pieces were hugely important in bringing a new type of collector to the table, and to AP specifically. Watch site Revolution notes that it’s difficult to separate Jay’s 2006 collaboration and the surge of AP mentions in rap songs that quickly followed. The partnership with Marvel suggests that AP thinks yet another type of watch collector is emerging. Most watch brands hew closely to tradition and focus on technical details, but this watch is for a much more modern collector—one who appreciates summer blockbusters as much as tourbillons. There is a small bit of evidence that AP’s bet will pay off: a watch Robert Downey, Jr. wore as Iron Man in Avengers: Endgame sold for $312,000 at auction just a couple of years ago.

Super details: That big Black Panther figurine isn’t some child’s toy. The piece is made out of white gold, hand-engraved, and then painted by hand. All in all, it takes 30 hours of work to bring the character to life. There’s a semi-hypnotizing video of the watch being made on AP’s site—get the Russo brothers to direct the next one and I’ll happily watch two more hours of the process.

Where and when to buy it: Now, at all AP boutiques. 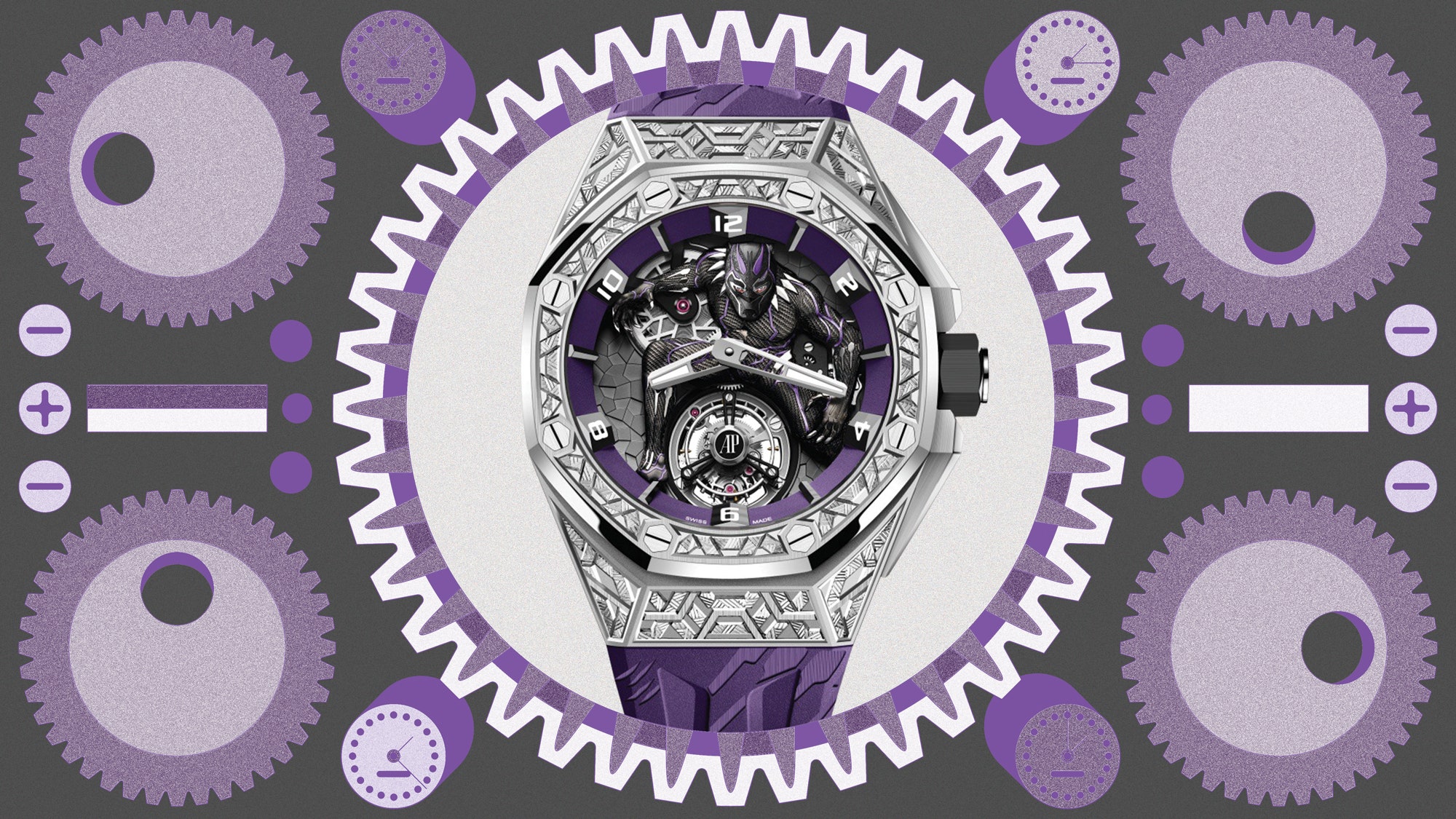