Range Rover Classics, those perfectly boxy Ranges made from 1969 to 1996, have shot up in price since becoming the grocery-grabbing, beach-bombing SUVs of choice for people who have cars just for the weekend. One problem. “I think when you have this ethos, you also need your vehicle to be able to actually go anywhere,” says Elliot Humble, one of the founders of E.C.D. Automotive Design in Kissimmee, Florida. “And that’s a big problem with Land Rover drivetrains. They tend to not work most of the time.”

As the committed owner of one, I know the pain. The vexing unreliability of Land Rovers has birthed an entire category of businesses aimed at creating better Range Rovers—ones whose engines start, whose doors remain closed, whose headlights turn on, and whose bodies don’t dissolve from the inside out. They’re called “restomodders”—as in “restoration” and “modification”—and these companies exist around the country. Hell, Land Rover itself is in on the action, factory refurbishing their own vehicles.

The expat-British restomodders at E.C.D. Automotive Design—brothers Elliot and Tom Humble, and their friend Scott Wallace—started like all the rest, replacing the troublesome parts with more dependable versions. But recently the company’s achieved a new power-up: a battery-electric Range Rover Classic. Built on Tesla technology, no less. “With electric vehicles picking up steam around the world, and with all the manufacturers leaning that way, we wanted to stay ahead and move forward with the technology as it progressed,” Humble said. “And the Tesla drivetrain is a really popular one at the moment. It’s fast, it’s powerful, it’s strong, and it’s very, very good.”

Batteries where you’d normally find a (broken down) engine.

So now these electric Range Rover Classics just work. But the whole point of a Range is to know that, if you’ve got the guts, you can climb over, wade through, or barrel down places where no roads go. So to make sure the E.C.D. Range Rover remains properly Range-y, the company had to go farther. The electric drive unit is mounted higher than normal, ensuring it doesn’t get bashed by rocks or drowned by a deep puddle. The battery packs are stacked under the hood and in the cargo area, so they’re no more vulnerable to puncturing than an engine or gas tank would be. (Though maybe don’t drive into a lake.) And as E.C.D.’s founders like to point out, because electric motors have fewer moving parts than gas-powered engines, ostensibly owners won’t have to deal with as many backcountry fixes.

While E.C.D. is in there, it will spruce up the Range to your specifications.

A gas gauge, but for electricity.

“Plus, I think the range we’re expecting is to be around 250 miles,” Humble said. That’s further than a tank of gas in my personal 1990 Classic, which averages about 11 m.p.g.—and that’s assuming the car remains operational for an entire tank of gas.

So what’s the future of vintage Range Rovers going to cost you? “If you’re looking at more of a retro feel, as though it just left the factory, but with an electric drivetrain, we start at around $195,000,” Humble said. The next level up, featuring off-the-grid goodies like roof racks, roll cages, spot lamps, and brush guards, costs around $250,000. And the top-of-the-line build is nearly $300,000. The price is mildly less painful knowing that a Tesla-fied Range takes E.C.D. about 2,200 hours to build. 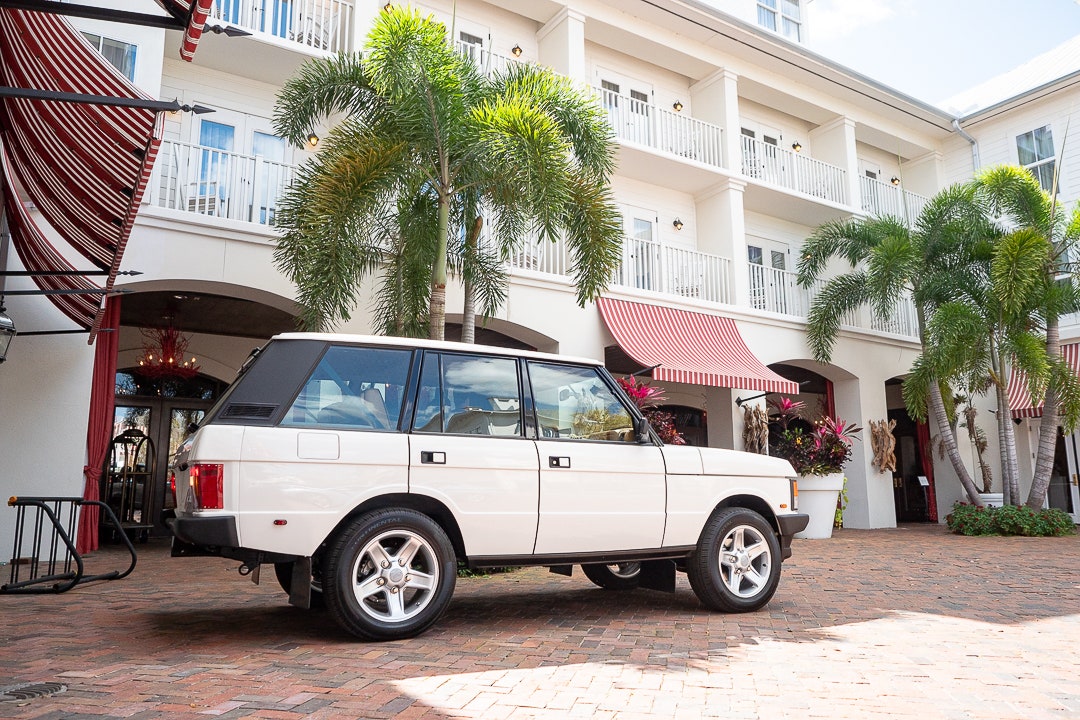