It might be a while since you last seriously considered the best Chelsea boots for men. We’re a few years out from the style’s heyday, and much has changed in the wild world of men’s fashion. But the Chelsea boot is still here, its spirit wholly undeterred by the shifting preferences of fickle footwear connoisseurs around the world. Trends? Ha! The Chelsea boot scoffs at trends. Ever since its midcentury rise on the streets of Swinging London, it’s seen more of them come and go than it cares to remember. It earned its coveted “essential” status the hard way: by actually living up to the honorific. So bring on the funky, fur-covered mules and the trail-ready sneaker hybrids. (No, really. Bring ’em on. It’s been a minute since the Chelsea boot had a nice laugh.)

At their core, the best Chelsea boots for men are defined by two important details: an ankle-hitting height and an upper constructed from two pieces of sewn-together leather. (The most common silhouette also features a panel of elastic that unites the two parts on either side.) But the key element to any Chelsea boot that aspires to Keith Richards–during-tax-exile greatness is the shape of the toe. The rule of thumb? The more tapered the toe, the dressier the shoe. Which means you’re going to want something that’s neither severely pointy nor clown-shoe huge. The ideal shape should look sort of like the top of an egg: round but not too round. And thanks to the sheer popularity of the silhouette, chances are there’s a great pair of Chelsea boots out there for you at this very moment. Sure, the Chelsea boot’s limelight may have dimmed ever so slightly over the last few years, but if 2021 turns out to be the decadent return to form it’s shaping up to be, we wouldn’t count the shoe out yet. Whether you’ve got $100 or $1,000 to blow, these are the best wear-with-everything Chelsea boots to buy right now.

It was almost a decade ago that Yves Saint Laurent’s ready-to-wear collections were rebranded Saint Laurent and the house’s aesthetic was overhauled from all things French and luxe and proper to only things bohemian, punk, and badass. And the anchor to every look then—and even now, post–Hedi Slimane, under the creative direction of Anthony Vaccarello—was a pair of sleek Chelsea boots. These boots, actually. The Wyatt is an archetypal black leather Chelsea boot, crafted in Italy out of calfskin leather that’s durable but still pliable (crucial for a shoe like this, which you want to look great but also to actually walk in—a lot). These are the standard-bearers because of all the tiny details they just absolutely crush: the ankle-hugging elastic, the almond-toe silhouette, and a smartly designed pull tab hidden inside the back that makes getting these on and off a breeze. Sure, they’re not cheap. But if you want the Rolex of Chelsea boots, then you want these boots.

The magic of Chelsea boots? If you grab the right pair, they can totally change your point of view. Conveniently, this is exactly what happened to GQ staffer Clay Skipper. “Clothes have never really been my thing,” he writes. And yet, after he picked up a pair of New Republic boots—sandy suede, cushy crepe sole, happy-making $128 price tag—the whole world shifted on its axis. “Walking to dinner one night, I felt like I’d finally slid into the slipstream, one more figure in the nightly parade of fashionable New Yorkers,” he says. “Even at dinner, my boots hidden under the table, I got an added dose of confidence just from knowing they were there. Also: The insoles feel like walking on memory-foam pillows.” Confidence-boosting, fashionable-making, pillow-walking boots at this price tag? Hard to turn down.

If this isn’t your first Chelsea boot rodeo, consider Common Projects. CP, of course, is the white-hot Italian label that turned super-minimal white sneakers into office- and wedding-grade attire. So when those footwear wizards turned their attention to the Chelsea boot, magic was bound to happen. Lo and behold, it did—which is roughly how you explain no less than Kanye West getting into multiple pairs. These come in suede, and add the high-cushion crepe outsole—and you get the brand’s signature heel-stamped gold lettering tossed in, too. Like everything else Common Projects makes, these boots find the happy medium between edgy continent-hopping DJ and elegant suited man, which means you can easily sport them at the office and on your next bar crawl (just try not to spill all your beer on them).

These Chelsea boots bridge the gap between dressy and casual better than any other on this list. R.M. Williams’ Gardener boots are well-suited for putting under a, uh, suit when you mean business, and under tried-and-true denim for your more outdoorsy activities (and by outdoorsy we mean anything from attending a barn wedding to buying groceries). The toes on these are scalpel sharp—trim and beveled, rather than round and bulbous. Which means they’ll look awfully good with anything slim and tailored.

Here, the good folks at Steve Madden grabbed the best elements of a high fashion Chelsea boot option and made it available—not to mention affordable—to the masses. The upper is made from real-deal pony hair, the toe box is perfectly chiseled, and the cowhide surface (a pattern even the most experienced footwear veterans struggle to get right) is the perfect scale for this type of boot. Face it tiger, you just hit the jackpot. [Chef’s kiss emoji]

It might not boast the centuries of history that some of its French and British counterparts do, but in just over 30 years Romania-based Saint Crispin’s has managed to establish itself as one of the most revered and sought-after bespoke shoemakers on the planet. The reason behind its relatively rapid rise in stature among the geekiest of menswear geeks? Grails like these, with a sculptural shape fashioned from exquisitely textured leather, all shined up to see-your-own-reflection perfection.

If you’re about the rock ‘n’ roll life (or at least the look associated with it) a silver Cuban heel might just be the easiest—and least dangerous—way to telegraph your freewheeling ways. Because what are Chelsea boots for if not strutting around your small, cramped apartment like you’re late-’70s Jagger getting ready to spastically launch into one more round of “Gimme Shelter” to the crowing adulation of the crowd?

The brand behind our go-to penny loafers also puts out an ace Chelsea boot for not a ton of money that features a slip-free rubber sole.

Sure, your beloved Blundstones (see below!) are technically an all-weather Chelsea boot. But their bulbous toe boxes and thick soles probably won’t pair exactly right with your finest tailored clothes. Paraboot’s collaboration with Arpenteur gives you the best of both worlds: those hearty lug soles will keep you high and dry in a downpour, but the swanky nubuck leather they sit on top of is pure class.

The best part about Chelsea boots’ long reign of dominance? The budget brands have had ample time to step their game up. These Aldo numbers won’t hold up for anywhere near as long as our favorite Saint Laurent pair, but for well under $200 they’re a pretty decent facsimile. Same higher rise at the ankle, same high-but-not-too-high heel, same aggressive toe shape, killer shade of almond brown suede.

Maison Margiela’s distinctive split-toe shoes have been a mainstay in the wardrobes of fashion insiders since the style debuted on the runway in the late ’80s. In Chelsea boot form, the slick design dials down the freakiness in an IYKYK move bound to appeal to footwear connoisseurs and Margiela stans alike.

When Daniel Lee took the reins at Bottega Veneta in late 2018, the Céline alum—the brand still had its accent when he was there—arrived with an impressive pedigree, but not much in terms of mainstream name recognition. Since then, the British designer has transformed the Milanese fashion house into a red-hot luxury powerhouse, routinely showing up on red carpets (remember red carpets?!) and the backs of some of the best-dressed dudes in the business. No products have defined Lee’s tenure at the brand more than the designer’s bulbous, exaggerated footwear, an instant hit when they first debuted and a mainstay of the brand’s collections ever since. Bottega’s highly photogenic puddle boot might be the most IG-friendly style the label offers, but when it comes to Chelseas, it’s tough to beat BV’s slightly sleeker silhouettes. Here, buttery calfskin uppers coupled with Lee’s now-signature transparent rubber soles let you flex your fashion bona fides without straying too far into influencer territory—a fine line the brand expertly straddles. If you’re looking for the defining Chelsea boot of the current moment, look no further.

The boots Lil Nas X probably had in mind when he first announced he had horses in the back.

For over a century now, Church’s has been churning out shoes the whole family can get behind. In other words, these are Chelsea boots your dad—and, hell, his dad—will want to steal from your closet as soon as they see ’em.

An absolute unit of a shoe courtesy of the freakiest dark lord in men’s fashion.

It’s hard enough to find an affordable Chelsea boot that could go toe to toe (heh) with its designer counterparts, let alone one made out of full-grain calfskin leather sourced straight from the finest mills in Italy. But the footwear upstarts at Beckett Simonon pull it off, and pull it off with style to spare.

Because the best boots on the market today should have a slightly Western feel to them.

It’s tough to beat a trusty pair of Docs in terms of sheer value propostion. That’s doubly true when said Docs are handsome as hell Chelsea boots that clock in at 150 bucks, and still include the brand’s deeply beloved (and supremely cushioned) rubber soles.

Martine Rose brings her particular brand of cheeky British style to a standout pair of Chelseas with a hefty angular sole.

Regular old Docs not doing it for you? Try a horsebit loafer-inspired pair made in collaboration with Needles, the latter brand’s butterfly (or papillion, if you’re being fancy) insignia very much included. 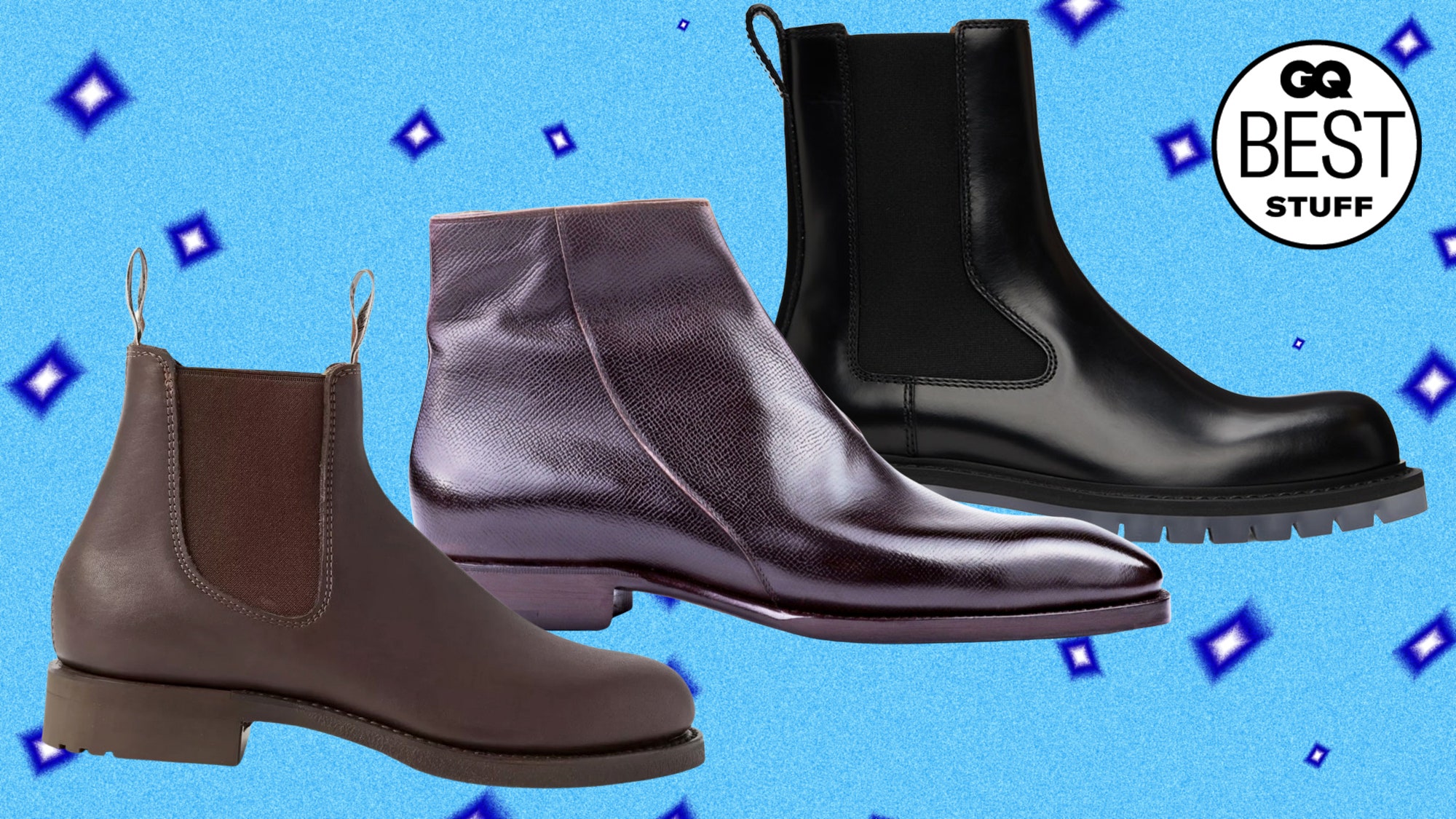