Throughout that time the trio worked to get the track in front of Jay-Z. “We always thought that was going to be Nip and Jay-Z,” says Mike, “from the jump.” Dopson regularly tours with Jay-Z as part of his backup band 1500 or Nothin, and put the track in Jay’s hands via his longtime engineer Young Guru. “Jay heard it five years ago when Nipsey was still here, and loved it,” Dopson says. “Then he asked for it again about a year ago.” Meanwhile Ryan Coogler, alongside Archie Davis and Dash Sherrod, began to put together the soundtrack for Judas and the Black Messiah, enlisting Hit-Boy to shepherd some original tracks, one of which is a solo track he recorded amidst the George Floyd protests. (“It’s crazy to see that this type of stuff that was happening in the 60s is still happening now. [The world is] still as messed up as it’s ever been,” Hit says.) Coogler put the beat back in front of Jay. “Jay watched the movie and then played the beat for Guru, and Guru’s like ‘Bruh this is the same beat from the other day,’” Dopson laughs.

“My relationship with Ryan, who I consider my little bro, [is what] brought me to the movie,” Jay-Z told GQ. “And once I saw it, I was blown away by what Shaka King brought to the table. I think I finished the song in the next day or two.”

“What It Feels Like” rises to the moment and the hype and, along with Jay’s recent features like Meek Mill’s “What’s Free” and his appearances on Jay Electronica’s 2020 album, continues his late-career creative surge. Some would argue he’s sharper and more politically blunt than he was ten years ago. On 2011’s “Murder to Excellence,” Jay rapped of his December 4 birthday: “I arrived on the day Fred Hampton died—real niggas just multiply,” a line Fred Hampton Jr. took offense to at the time, considering “died” to be a euphemism. On the new song, Jay makes it plain: “I arrived on the day Fred Hamtpon got mur-hold up: assassinated, just to clarify it further.” (He also pledges to split his fee for the verse among Hussle’s and Hampton’s estates evenly.)

“It’s unfair for him to be going that crazy, still,” Hit-Boy laughs. All the prerequisites of a winning Jay-Z verse are here: brags about his latest business venture, a cannabis brand (“I’m sellin’ weed in the open, bringing folks home from the feds”), sneering jabs at white authority (“You let them crackers storm your capitol…I lost all my little respect”) and dazzling wordplay like the Drake-cocaine double-entendre he opens with.

Dopson recalls Guru FaceTiming him alongside Jay-Z to play him the verse: “Jay had a blue Crenshaw jersey on,” Dopson says, “And they were telling me to go crazy on [the outro]. They were like, ‘This is for a movie, so give us a movie [on the song].’” Dopson responded to the challenge by assembling an array of formidable vocalists including HER, prolific songwriter James Fauntleroy, Marsha Ambrosious, B.J. the Chicago Kid and Ant Clemons for a hymnal outro he refers to as “a collage of spirits.”

“Anytime you hear some new Nip, it makes you feel like he’s still here,” says Hit-Boy. Still, the celebratory vibe of the track is undercut by the somber reality that it’s a posthumous one. The final realization of the Nipsey-Jay collaboration is hard to enjoy, considering how many other plans will never come to fruition. “Nip always wanted a song with him,” Keys says, but he never pressed the issue. “One thing about Nip man, he’s not going to ask anybody for nothing,” says Dopson. Mike reveals Hussle’s original idea for a collaboration was for Jay to get on a remix to Victory Lap’s “Rap Niggas,” but the moment never materialized. “Nip [was a] timing guy,” remembers Keys. “He was like, when the time comes, it’ll happen.” Although the capitalist ideology of both men likely wouldn’t have squared with Fred Hampton’s socialist politics, it does feel appropriate for two rappers who have been so vocal about black empowerment to come together on an album paying tribute to his legacy.

As bittersweet as the movie’s themes are, Jay-Z puts it best: “Like Chairman Fred Hampton said ‘You can kill a revolutionary but you can’t kill the revolution.’ Every time you take one of our loved ones, their spirit and soul and ideas inhabit millions.’” Like the line that ends his verse (“We gon’ turn up even more since y’all killed cuz”), his words work as a tribute to both Hampton and his fallen peer. “I feel like [Nipsey] is really proud right now,” Dopson muses. “If Nip was here, he’d say, ‘What are y’all doing? Let’s keep working and get to the next stage. Let’s not get comfortable.’” The marathon continues. So does the revolution. 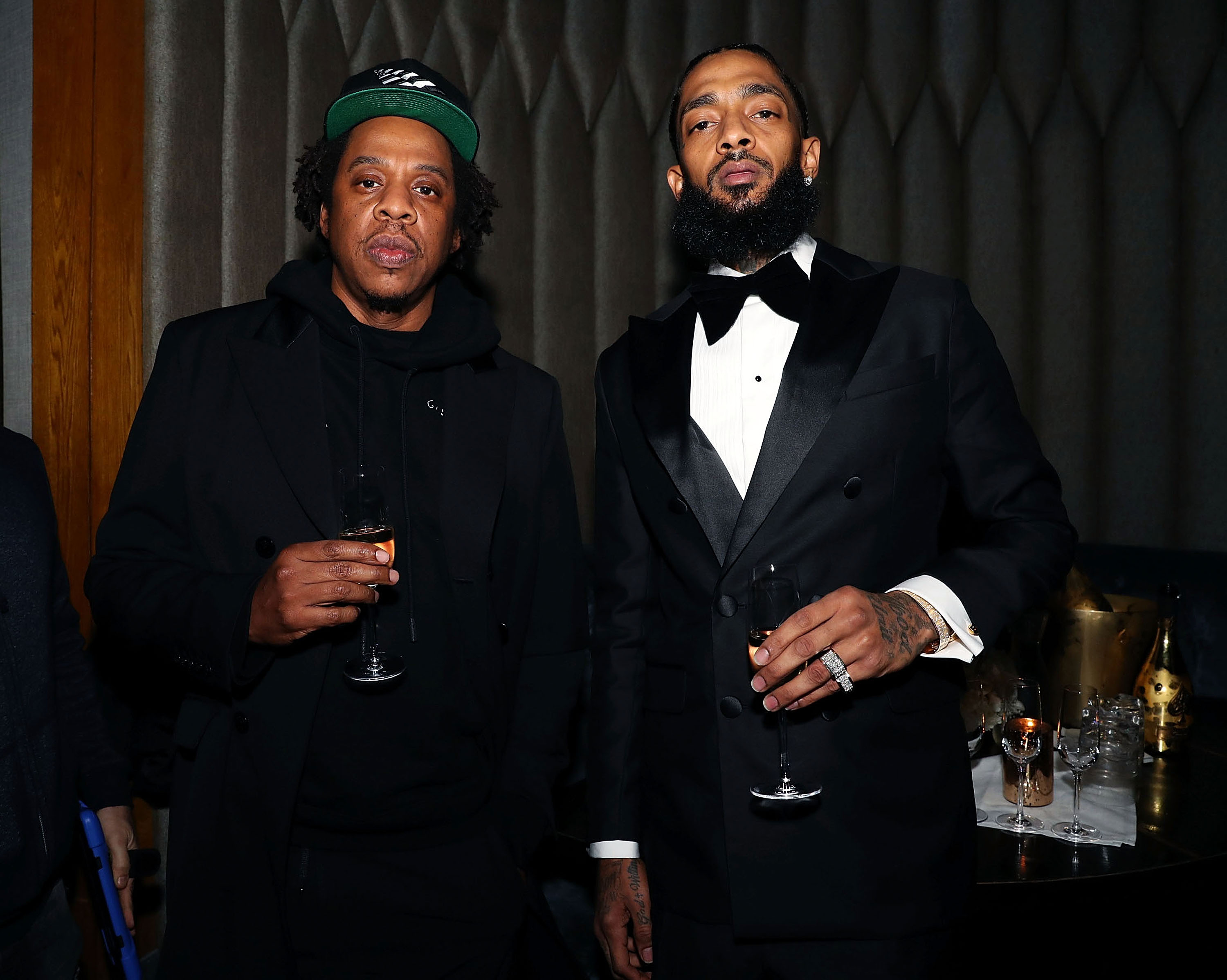