Gorpcore—utilitarian clothing by the likes of Patagonia, The North Face, Salomon, and a slate of cult brands based abroad—has become one of menswear’s central driving trends over the past five years. The phenomenon has not escaped the attention of Kiko Konstadinov, the 32-year-old Bulgarian-British designer who is one of the industry’s freakiest and most thoughtful young talents. “I think everyone wants to be Patagonia or Arc’Teryx,” he said, in a Zoom conversation last week. The appeal of being not a fashion brand, but a technically-minded, vaguely ethical corporation, seems obvious.

But Kostadinov scrutinizes everything, especially the obvious. He has developed a cult following among fashion fanatics, especially students, for creating titillating, almost Dadaist clothes that stretch the utilitarian into the decorative and vice-versa—jockey helmets, racing stripes, shell jackets, and Renaissance capes have all been hero pieces in Kostadinov’s output. And, like most millennials, he’s hyper-tuned into industry trends and realities, equal parts artist and industry critic. (Jonathan Anderson, though more established, thinks the same way.)

“There was a lot of thinking of how to escape,” Kostadinov said of the clothes he debuted last Friday, his Fall 2021 offering. He was speaking about how the psychological impact of the past year shaped this collection, but also about the design confines of the performance wear—gorpcore—that is increasingly dominating high-fashion menswear. He mused on the limiting assumptions behind those clothes: “Things looking too outdoor, or too Sci-fi, or futuristic or technical.” (It made me think: there is indeed something lurking beneath the placid pragmatic surface of gorpcore. What’s with the survivalist paranoia? Why is there a sense of embarrassment around design that isn’t purely functional? Why are men so eager to get to the future?)

“So it was like, how do you challenge this?” Kostadinov said. “How do we break some of those things?”

In response, Kostadinov’s clothes get at a much more ambitious idea of escape. The collection contains three sections describing his moods (our moods, really) over the past several months: one week, he wants to live in a cottage in Alaska or Dorset or back in Bulgaria; the next week he wants to “travel the world and buy clothes and spend money and see exhibitions and go to parties”; and then he feels like he’s on a rollercoaster of in-between. This third section is perhaps the most familiar to us all. It’s like “a glitch,” he said, between the first two moods. 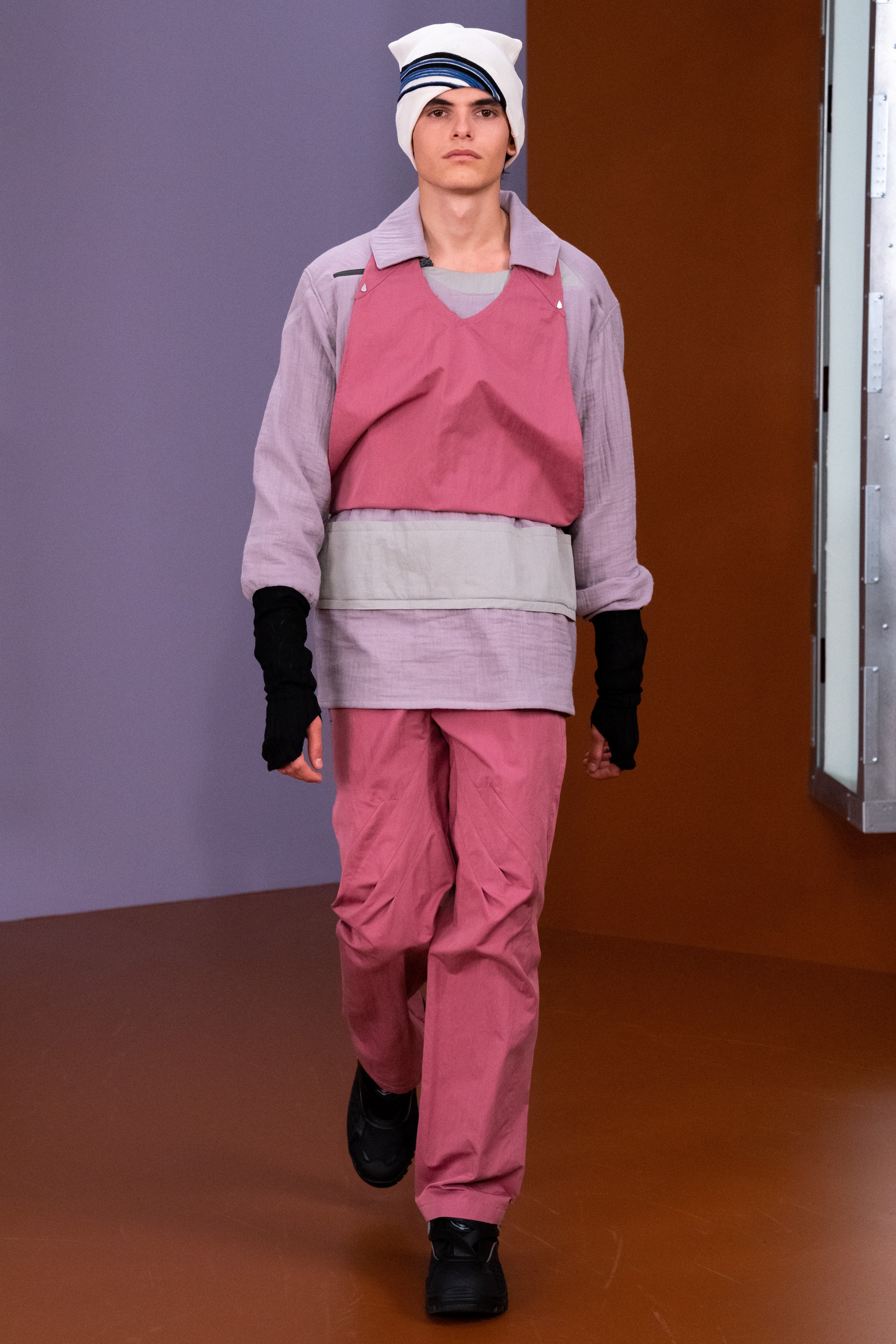