Tackling a subject head-on can backfire. Directed by Craig Zobel (Compliance) from a script by Damon Lindelof and Nick Cuse, The Hunt pits liberal elites against conservative “deplorables.” Maybe the unluckiest movie of the past few years, it opened just as the pandemic shut down theaters after being pushed from its fall 2019 release date when online conservatives raised a stink about its premise (never mind that it frequently casts liberals in a much harsher light than their opponents). It’s hard to feel too bad about its fate, however. Its unsubtle satirical vision of America ultimately has little to say about the deepening divide between haves and have-nots. By contrast, the Korea of Bong Joon-Ho’s Parasite offered a sharper depiction of the deepening chasm between haves and have-nots. (Lindelof and Cuse made no end of sharp points in HBO’s Watchmen, however, even though it unfolded in an alternate-universe United States.)

To my eyes, however, nothing quite captures the feeling of living in the Trump era quite as well Us, Jordan Peele’s second film as writer/director, a work of free-floating dread in which everyday life becomes fraught with peril and America starts to reinvent itself as a horrific mirror image of what it once was.

Few artists have transitioned from one job to another quite as well, or quickly, as Peele, who made his debut as a horror director less than a year after the premiere Keanu, the feature film extension of his longtime comedy partnership with Kegan-Michael Key. Released in 2017, Get Out emerged as an instant classic, mixing sustained creepiness, dark comedy, and thorny commentary to create a potent film about the persistence of racism in 21st century America, even among those who present themselves as too enlightened to practice it.

Get Out works a clean, memorable metaphor whose implications grow more horrific as the narrative progresses. It’s a complex film in many respects but an easy one to grasp. Us is different. Any attempt to tie it to a single reading proves futile but its vagueness helps give it power.

A quick refresher: Us stars Lupita Nyong’o as Adelaide Wilson, a woman still traumatized by a childhood incident in which she wandered into a funhouse off the Santa Cruz boardwalk and encountered her doppelgänger in a hall of mirrors. Winston Duke co-stars as her husband Gabe alongside Shahadi Wright Joseph as their teenaged daughter Zora and Evan Alex as their younger son Jason. Returning to Santa Cruz for a vacation as an adult, Adelaide has to overcome her aversion to the beach, where the family spends time with Gabe’s obnoxious co-worker Josh (Tim Heidecker) and Josh’s wife Kitty (Elisabeth Moss), who attempts to draw Adelaide into conversation with talk of plastic surgery and speculation about roads not taken in spite of Adelaide’s obvious discomfort. Adelaide’s unnerved by the outing, but even more unnerved when a quartet of jumpsuit-clad doppelgängers arrive at their doorstep and attempt to invade their home.

Through it all, Peele creates an atmosphere in which even the most pleasant locations take on air of danger. At the beach, the gulls gather a little too thickly and squawk a little too loudly. The beach house reveals itself as a place of dark corners, closets that can’t be opened from the inside, and unpleasant memories. It’s an unwelcoming home, but one they find themselves forced to defend against doubles with whom they’re unknowingly linked, beings whose personalities resemble violent caricatures of their own.

The film begins with a promo for the 1986 charity event Hands Across America, a benefit for the homeless in which volunteers formed a human chain that (mostly) stretched from one coast to the other. It ends with a chilling reference to the same. The doppelgängers, or “Tethered,” can be read as a stand-in for all those forgotten by those, like Adelaide, who’ve achieved a level of wealth and privilege that allows them to live apart from the less fortunate. “We’re Americans,” Adelaide’s double, a terrifying woman named “Red” by the credits, tells her. After emerging from a subterranean lair and taking over Santa Cruz, the Tethered seem determined to stay underground no more and take what they believe to be theirs, by force if necessary. 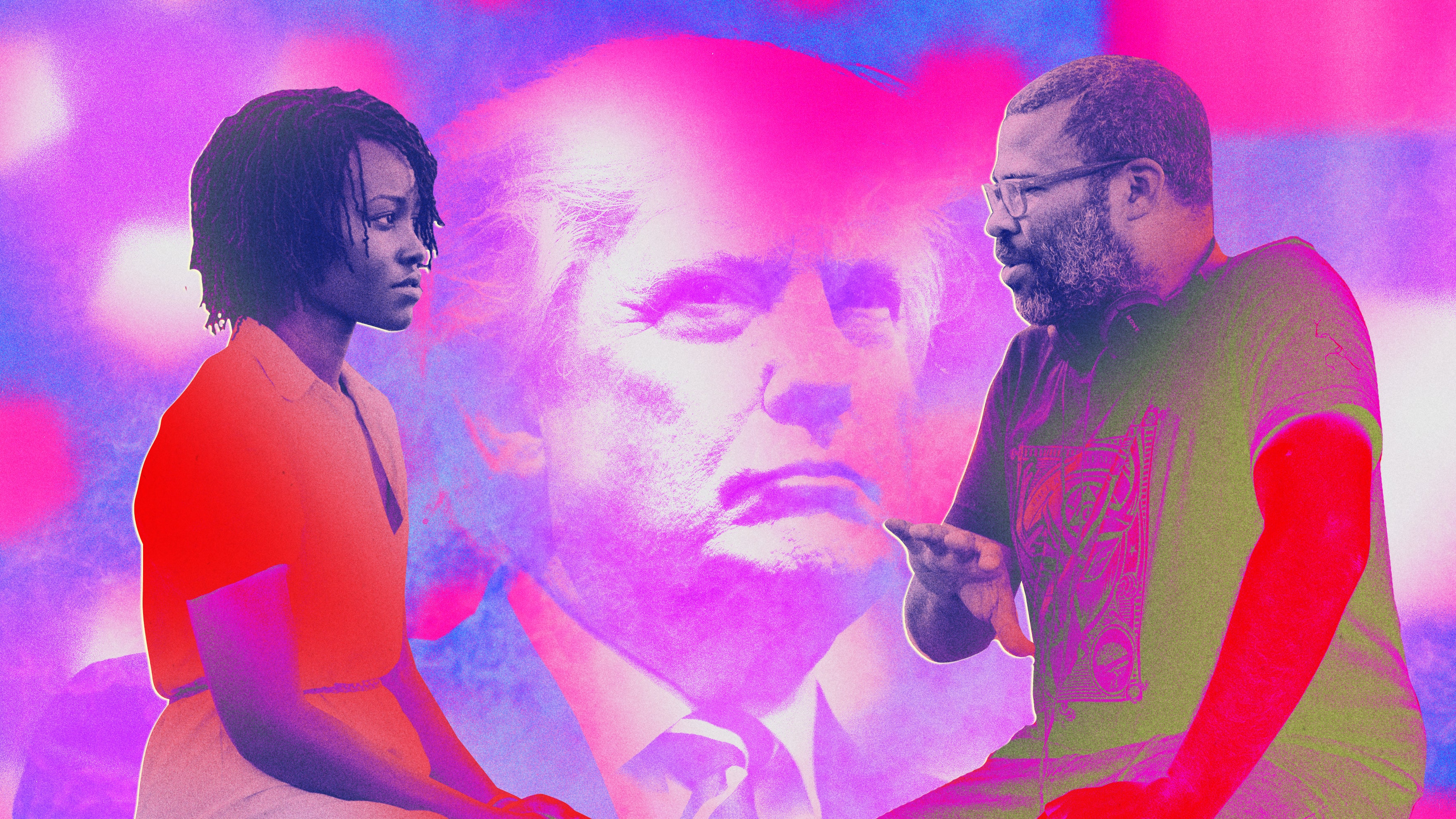