Like everything else in the world, the watch industry was in constant flux this year. Trade shows were canceled, releases were taken off the calendar (only to be put right back on months later), and every event worth wearing a watch to didn’t conform with CDC regulations. The lack of award ceremonies and chichi parties heavily suppressed the volume of watches that came onto our radar this year.

But the watches were still worn. And, surprisingly, our accounting of the watches we spotted this year very closely mirrors what we saw in 2019. While overall numbers were down across the board, many of the same watches and brands that reigned supreme in 2019 did so again in 2020. But maybe that shouldn’t be a shock: watch collectors are a fanatical bunch. A Rolex Forum thread from April that asked “Do you wear your watch at home during the lockdown?” was received with a resounding series of duhs. I know one collector who, during normal times, would wear one watch during the day, and then put on another one at home to wind down. (He’d sleep wearing the second one.) Celebrities with watches aren’t that much different. Take Chris Pine for example. Last year, he may have worn his gold Rolex Day-Date to Comic-Con, or on a seaside vacation. He doesn’t put his watch on ice simply because those events were Thanos-snapped out of existence. The context just changes: now, he’s wearing the same watch on a masked-up coffee run. And as you’ll see, Pine was just one of a number who kept on keeping on this year.

The Most Popular Watches of the Year

Far and away, and for the second year in a row, the watch celebrities wore the most was the Audemars Piguet Royal Oak. The watch sits comfortably in the middle of the Venn diagram between dressy and casual, is unmistakable with its iconic stop-sign shaped bezel (ironic for a piece that makes celebs want to go, go, go to their local dealer), and maybe most importantly, comes in a lot of flavors. Scan the 20 different Royal Oaks worn by celebrities this year and you’ll find the model in vintage gold, black ceramic, with a tasty grape dial, set with a rainbow of diamonds, and built with tourbillons. AP has flooded the zone with the Royal Oak, and the results speak for themselves.

The second most-worn watch was (again) the Patek Philippe Nautilus. While the watch has a famously long waitlist, you wouldn’t know it from looking at the wrists of celebrities. The only change between this year’s top three and last year’s is the third spot. Taking the Rolex Daytona’s spot in the ranking is the… Rolex Day-Date. (Change is hard.) We’ve traded out one classic for another—but something might be afoot here. The Daytona has been on fire for years, but with any industry that revolves around the stuff we put on our bodies, trends shift. Might the Daytona have peaked? Could we be seeing the beginnings of a slight but perceptible shift towards dressier watches over super-sporty ones? Could collectors really be gravitating towards watches in fine metals like gold after years of stainless steel tyranny? Maybe. Or maybe this is just another anomaly in a year full of them.

The Most Popular Brand of the Year

Same as last year, Rolex put together a commanding victory in this category. In fact, celebrities wore the Crown nearly twice as often as they wore any other brand (43 for Rolex versus 24 for runner-up Audemars Piguet). What makes Rolex so unbeatable in this category it’s that its bench of watches is super deep. You can get to 43 really fast when Chris Tucker’s wearing a Deepsea, Megan Rapinoe and John Cena both wear the Explorer II, and the likes ofMichael Jordan, Michael Strahan and LaMelo Ball all gravitate to the Sky-Dweller. And those aren’t even Rolex’s most popular models.

Strictly in terms of this list, the brand that lost the most juice this year was Richard Mille. The brand’s sometimes-horny, always-sexy watches only popped up 14 times this year, compared to 35 times last year. (Celebrities wore 19 different models from the brand last year, too.) It doesn’t take a rocket scientist—or someone who understands what it means that the new RM 72-01 boasts a “flyback chronograph which incorporates a double oscillating pinion mechanism”—to figure out why. Richard Mille was the sort of brand that popped up at the year’s biggest parties, awards show red carpets, and courtside seats. People wore fewer Richard Mille pieces for the same reason you swore off “hard pants”—there just weren’t as many occasions and reasons to wear them. Not even Lil Baby, who heroically wore one RM on each wrist recently, could save the brand’s slight deflation.

While almost every watch and brand waned this year because of the pandemic, two brands overcame the odds and actually put up slightly more points even with less game time. The first brand is Jacob & Co. which had a breakout year after reclaiming its spot as everyone’s favorite over-the-top jeweler. The brand collaborated with Virgil Ablohm who wore his J&Co watches frequently, and Supreme. It also collected new fans like Drake—who apparently turned in his sex watch for one with a roulette wheel—ASAP Rocky, and supermodel Alton Mason.

The other riser is a real head-scratcher: Cartier—the famous French maison best known for its dress watches—actually got more shine this year, even though there were fewer black-tie events than ever. The Cartier popped up in all sorts of unexpected places: on Kamala Harris and Jill Biden’s wrists the night Joe Biden and Harris gave their victory speeches; in the Sofia Coppola movie On the Rocks; and on Tyler, the Creator’s wrist, after he’d been loyal to a Casio for almost his entire career. Even Kim Kardashian recently wore the famous Crash model. (Presumably she shares the piece with Kanye.)

All That Glitters Is Still Gold

Another surprising nugget: diamond-set rainbow watches were on fire this year. My assumption heading into this tabulation was that a year spent indoors would lead to more chilled out, simple watches. Instead, celebrities wore more factory-set, blinged-out watches than ever. Both the Rainbow Royal Oak and Rolex’s Rainbow Cosmograph Daytona got more shine this year compared to last. Nearly all the spottings—on Travis Scott, Stormzy, and Mika Federer—took place before the world went into quarantine. There’s no telling how popular they may have been had 2020 gone even remotely smoothly. Still, we’ll always have Patrick Mahomes treating his watch collection like a constantly evolving Pokémon: through the course of this year he upgraded from a Rolex Yacht-Master to a GMT-Master, and then he reached his final watch form with the Rainbow Daytona. 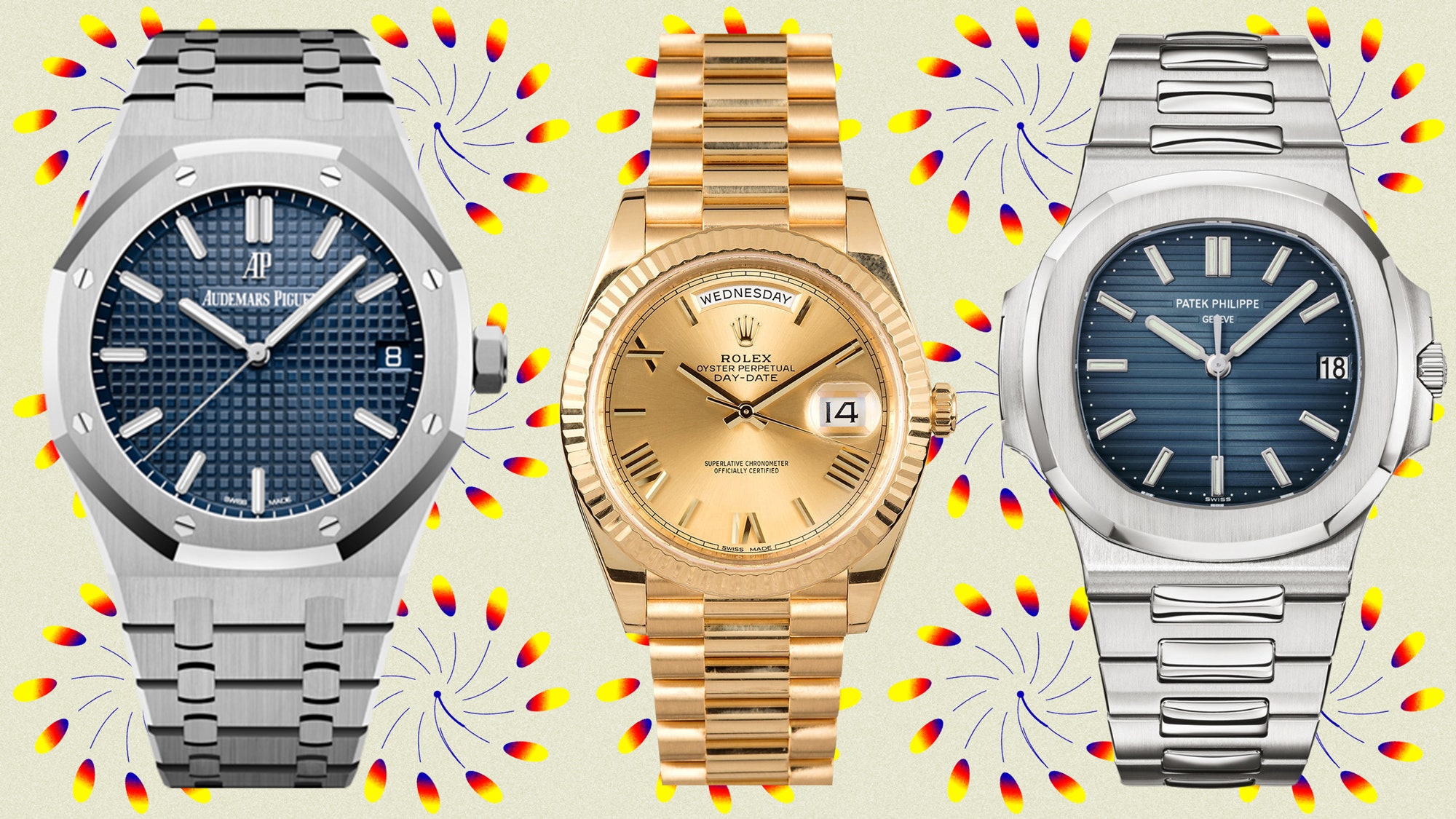