Every year, the Baselworld watch show is Christmas in March for horology heads. This year, of course, Basel—and every other major watch fair—was canceled. In fact, the pandemic forced almost every major brand to delay introducing new designs planned years before. (Even top-tier luxury houses know how to read the room.) Each brand had to adapt to the current state of affairs, foregoing the usual new-watch bonanza to instead roll out smaller-than-usual collections. Some amazing pieces came to market from all over the world, for sure, but it was definitely an off year. That is, for every brand but Grand Seiko.

Though 2020 will go down as one of the least auspicious years of our lives, it marks the 60th anniversary of Grand Seiko. And thankfully, the Tokyo-based manufacturer decided to move forward with their plans to celebrate. There was no gala or celebrity-studded campaign—just a wave of new releases that flexed Grand Seiko’s mastery of basically every category of watchmaking.

In the lineup, there are travel watches, diving watches, and chronographs. There are quartz, spring drive, and mechanical options. There are sporty ones, dressy ones, and sporty-and-dressy ones. There’s something that will satisfy any budget, with prices running from $2,600 all the way up to $185,000, for a diamond- and sapphire-encrusted novelty). But to me, the majority of the firepower in the lineup is in the sub-$10,000 range.

In fact, I would call the Grand Seiko SLGH003 the best watch of 2020 in that bracket. It’s got an incredibly innovative movement with a new dual impulse escapement, which GS spent 9 years developing. And its “Superman” color scheme is nothing short of fantastic. Grand Seiko employs the color blue better than any other watchmaker, and this piece captures why: the GS blue is deeper and richer than any other, like they’ve captured the pure essence of the ocean.

On the higher end of the spectrum, the SLGH002 is limited to 100 pieces worldwide. It’s the exact same design as its steel brother, but is housed in 18k yellow gold and fitted on a crocodile strap with a three-fold clasp. Be warned—it had a Midas-like mesmerizing effect on me, and when I tried it on it I could barely bring myself to take it off.

Most watchmakers tease out different versions of watch designs over many years. They’ll introduce a model in yellow gold, then follow it with a white or rose gold version over the next few years. Four years later, you might get a platinum version. What’s exceptional about Grand Seiko’s 2020 lineup is they’re not only offering the same design in multiple metals, but they’re doing almost all of them in steel, too. The SBGW57, 8, and 9 are all the same perfectly elegant dress watch done in platinum, gold, and steel. Think about how fun it would be if more watchmakers let you choose designs from a range of pricepoints. Maybe then not everyone would wear the same three steel sports watches.

One thing I love about Grand Seiko is how so many of their watches are inspired by Japan’s natural beauty. The SBGA427’s green accents are a nod to Kyoto’s Arashiyama bamboo forest / $5,000 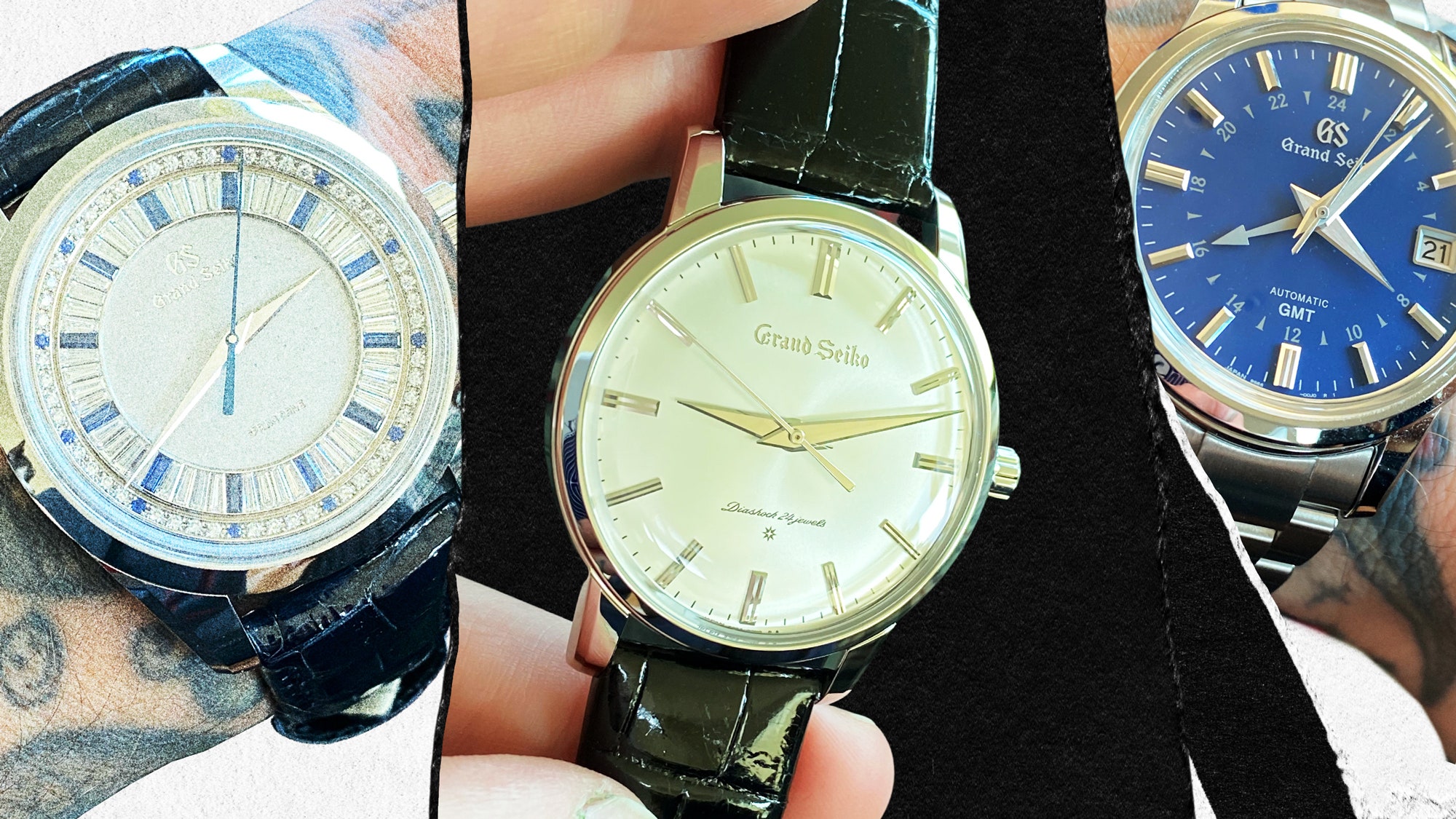