This weekend, Donald Trump played dress-up. As the coronavirus swept through the White House and reached the Oval Office, the president who spent months purposefully obscuring the severity of the pandemic, holding literally deadly campaign rallies, and mocking mask wearers, Trump trained his focus on the all-powerful image. And in an effort to look good for the cameras that followed him or the ones he invited into his suite at Walter Reed Medical Center, Trump returned a number of times to a reliable standby to project good health: his suit.

This weekend, Trump used the suit and all it symbolizes as an effective costume—a necessary stage piece in his ongoing political theater. It kept popping up: after reportedly requiring supplemental oxygen, Trump dutifully put on a suit to walk to the waiting helicopter that would ferry him to Walter Reed. Conspiracy theorists online argued that he was hiding an oxygen tank and tubing inside his too-big suit. Whether or not that was true—it wasn’t—Trump was using his suit to cover something up. “Trump insisted on walking to Marine One,” Gabriel Sherman, Vanity Fair’s White House correspondent, reported. “For the visual.”

These suited visuals became a point of obsession over the weekend. On Saturday night, photos and videos of the president working (or, uh, signing blank papers) from his Walter Reed suite started floating around social media. There was Trump in a blue suit and a white shirt with an unfastened top button—so busy he couldn’t put on a tie, or simply relaxing over the weekend?—speaking directly from the hospital. Consider for a second how strange that is: in what universe would anyone sick enough to require hospitalization get out of bed and go through the process of putting on a suit? Who is that for? We got our answer immediately as Trumpsters put the imagery to use. “Spoke to my father again and he is as optimistic, thankful and strong as he looks and sounds in this message,” (emphasis mine) Ivanka Trump tweeted. The suit’s look helped obscure some unpleasant realities: can someone professionally dressed really be concerned by bad vitals, a need for oxygen, and a 103° fever?

Trump’s approach was notable for the way it contrasted with tradition. In the past, when presidents have stayed at the hospital, they’ve let the public see a softer side of them. After the attempted assassination of Ronald Reagan, the former president took a photo from the hospital in a leisurely silk robe and pajama set while clutching his wife’s hand, seemingly for support. He looked well put together—his hair carefully parted in its familiar shape—but he also looked human. But even after being given the opportunity to humanize himself in the face of a virus that’s killed more than 200,000 Americans, Trump did Trump. He urged followers not to be afraid of the disease, and dressed up in a suit to pose as a healthy person for his hospital stay and Sunday’s joy ride. “This is a standard trope in the genre of authoritarian politics that Trump practices,” The Washington Post writes. “Trump’s personal invincibility becomes a stand-in for the infallibility of his overall performance.”

Trump was in a suit again Monday night, after being discharged from Walter Reed. He reportedly insisted on exiting from the hospital’s golden doors and returning to the helicopter, and walked the distance like a model on a catwalk showing off his dangling, exaggeratedly long tie. Before boarding the chopper, he flashed a thumbs up. The show kept going when he returned to the White House. He labored up the stairs and presented himself on the balcony. At the top he stood “strongly,” according to White House press secretary Kayleigh McEnany (who, notably, also tested positive for coronavirus). The whole scene was cut into a sleek video worthy of a triumphant president at the end of an alien attack movie. He was the president from central casting. And then, in a last show of immunity, after becoming infected with a virus despite having every advantage in the world, Trump took off his mask and posed for the cameras wearing nothing but his power suit. 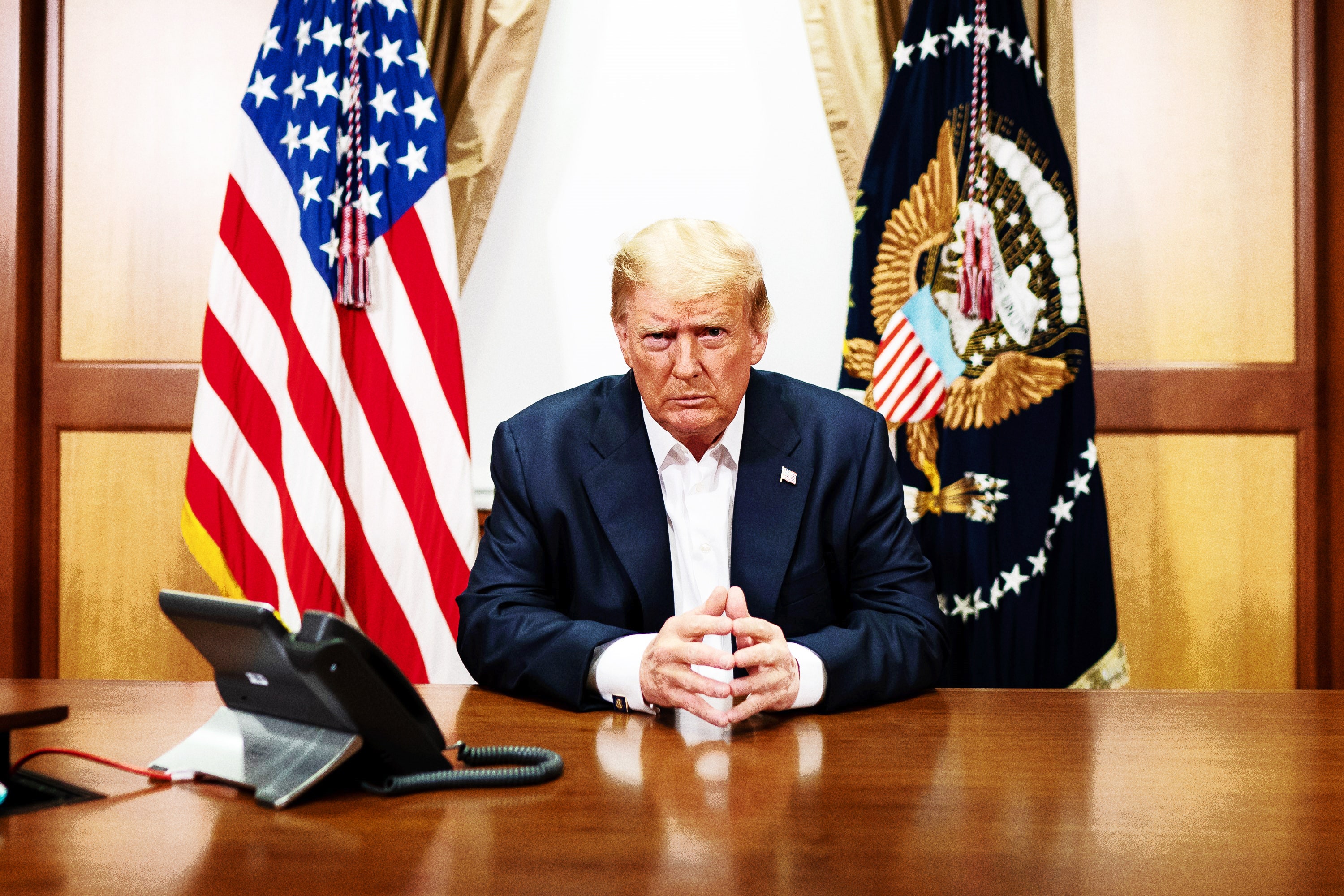