Earlier this summer, talking about his fall 2021 show, Jonathan Anderson said that fashion should be a little quieter at the moment. I get that. I love the idea of a wardrobe that serves a person just trying to live with a bit of dignified glamour, like Anderson did at Loewe in July with his simple, proper coats and Prada did with its pin-neat lounge looks the same month. Very bourgeois, and full of the sort of stability many find comforting in these times. Your clothing doesn’t have to be sad sweatpants, but it doesn’t have to shout either. And anyways, all the political fashion—the “VOTE” T-shirts and all that stuff—makes me wanna claw my eyes out a little.

But there’s another school of dressers right now that wants fashion to be loud. These are people for whom fashion is a part of declaring identity, for whom dressing wildly approaches a political act. Menswear has been the locus for a lot of that energy, because it really does mean something for a guy to wear a crazy blouse, but some of that spirit seems to be percolating in womenswear this season too. Maisie Schloss, who launched her brand, Maisie Wilen, last year, certainly has it. Schloss started as a designer at Yeezy, and her brand was launched with seed money from Kanye West, the idea being that hers would be the first in a conglomerate of brands. She shares her former boss’s taste for strange fabric, and has a heady handle on the way clothes make us act online.

Coming from Yeezy, she knows something about how menswear sets the world on fire: with the fit pic. “My clothes tend to photograph well, and they have become such a popular, you know, posting item,” she says. Indeed, her clingy, pop art–inspired dresses have become events in and of themselves on social media—clothes worth wearing just for the selfie. When Schloss started the collection back in February, she was already thinking about how she could play into that, creating illusions with her prints and fabrics.

The clothing looks, if not crazy, then at least hot in a pretty weird way. There are some oozy, pleathery-looking slime-green pieces, and some fantastic dresses and separates in a silver fabric that looks like tinfoil or a space blanket. Those were paired with schlumbo-sized boots that remind us she learned “what are thooooose” footwear design from the master himself. Her one-shouldered ooze dress with an asymmetrical hem was the coolest look in the collection; a tinfoil suit with fringe sleeves was the second. But they are tactile experiences too—she likes fabrics that are “a surprise,” she says, and so the slime-green stuff is actually slimy, not sticky like pleather, and lined with terry cloth. The silver fabric is “much more fluid” than tinfoil, she says, and can be manipulated and crunched into different shapes.

Schloss’s freaky manipulations made me think a little bit about two simultaneous revolutions in the fashion world: one real one, led by women like Paloma Elsesser, asserting a main-stage space for the kinds of voices that used to be shut out of fashion, and on the other hand, the reign of terror wrought by virtual influencers like Lil Miquela. The most authentic thing happening concurrently with the least. What elevates Schloss’s pieces above mere Instagram fashion is that they suggest the power of accepting the performance element of being online and embracing it, even exploiting it—something that those seeming counterrevolutionaries have in common. It’s not the knowing, winky feminine performance of Susan Sontag’s camp, but something more ceremonial. I could see some burgeoning ASMR TikTok star putting on Schloss’s tinfoil dress and crumpling it for zillions of likes while, I don’t know, singing a Phoebe Bridgers-y cover of Bowie’s “Oh! You Pretty Things.” The most authentic thing and the least might be one and the same.

I asked Schloss what she learned by being in a menswear-heavy environment. “Anything goes,” she says. “If you believe in a piece, it doesn’t matter if it’s like, ‘Oh, but the customer is a woman who wants this or that.’ No, just go for it.”

Courtesy of Imitation of Christ

Courtesy of Imitation of Christ

Meanwhile, offline (!), Imitation of Christ was staging a revolution of their own. The “political art project disguised as a ‘fashion house,’ ” as founder Tara Subkoff has described it, was started 20 years ago and went on hiatus a little over a decade later, relaunching with a guerrilla couture show in L.A. back in July. On Monday night, Subkoff and her collaborators staged a show in L.A. and one in New York, screening a video of the collection on a wall in SoHo while a masked opera singer belted out soprano hits (like “Addio del passato,” from La Traviata). It was much more relaxed and spaced-out than other physical fashion shows I’ve heard about or seen online. Plus, “I make performance work,” says Subkoff, who is well-known outside the fashion world as an actor and performance artist. “I really love participatory art, so when you come to something like this, you’re participating in the piece.” 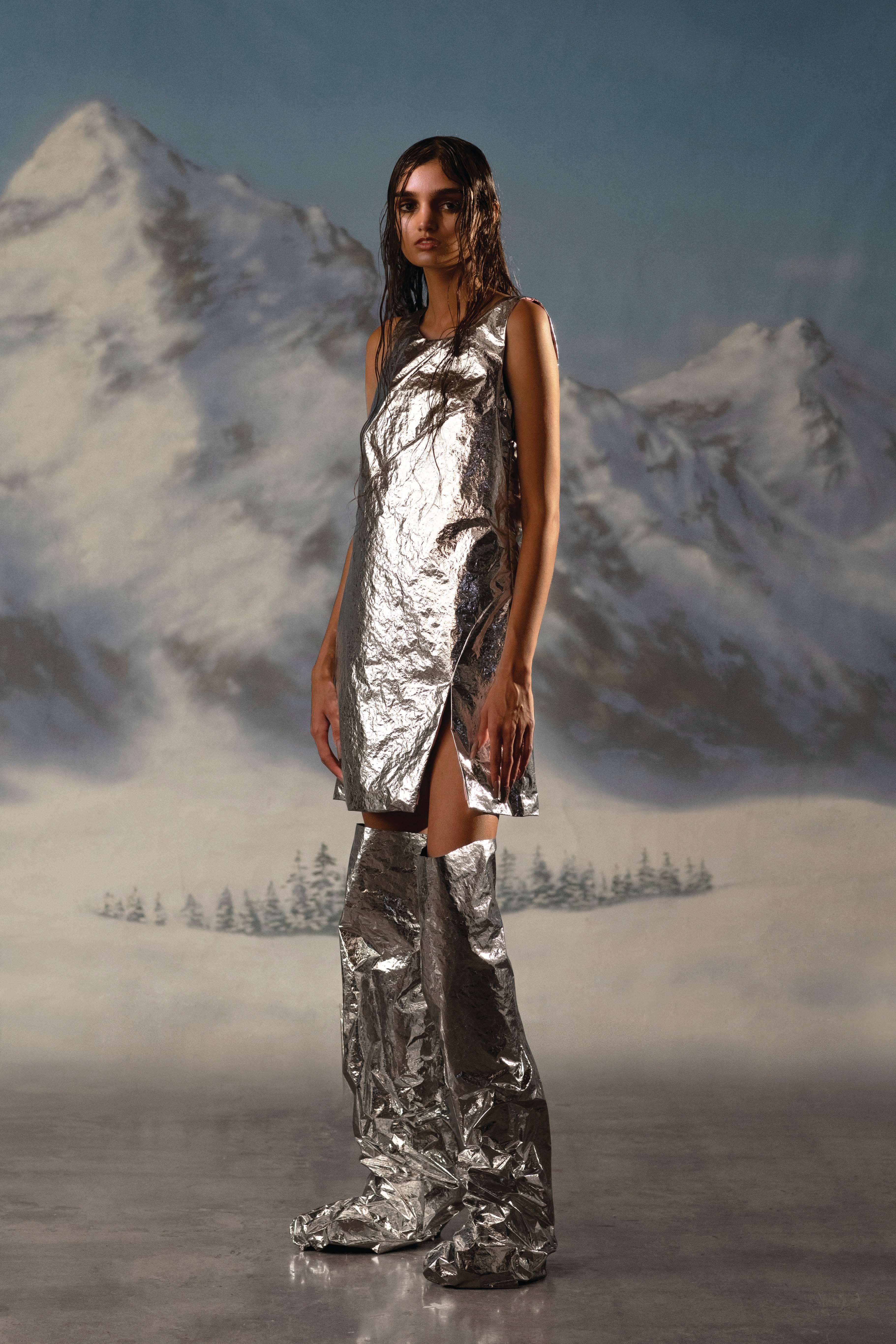