“Find someone that looks at you the way Patrick [Mahomes] looks at his Super Bowl ring,” the Kansas City Chiefs wrote alongside a video of their star quarterback unpacking his new piece of bling. Well, I found someone, and that someone is me gazing longingly at Patrick Mahomes’s watch: a Rolex GMT-Master II with a blue-and-black “Batman” bezel. Mahomes’s trophy case of high-shine accessories is growing exponentially by the week. Back in February, during the Chiefs’ championship parade, the quarterback wore a Rolex Yacht-Master while palling around with his new BFF, the Vince Lombardi trophy. Now, Mahomes has put another watch into his rotation to pair with his new Super Bowl ring. It comes as no surprise that the former league MVP and Super Bowl MVP would consistently reach for Rolex. As we’ve written before, the brand constantly markets its proximity to champions and winners, burnishing its reputation through folks like Tiger Woods and Roger Federer. If it’s de rigueur for the reigning Super Bowl MVP to take a trip to Disney World, the unofficial watch of such a victory lap is the Rolex.

Courtesy of the Kansas City Chiefs

This GMT isn’t Robert Pattinson’s new emo-punk Warped Tour-at-seven-and-vigilante-justice-at-midnight take on Batman, but something closer to George Clooney’s glossy take on the caped crusader. The watch was redesigned and released as Rolex’s big new piece for 2019. The new incarnation of the GMT was outfitted with the more elegant Jubilee bracelet seen here, making it a better fit for fancy ring-accepting ceremonies.

The Batman is a truly iconic watch in a vacuum but how well it goes with the Chiefs’ new super-blingy 10.5 carat Super Bowl ring is up for debate. When Drake got his mitts on a Raptors Finals ring earlier this year, he showed it off with an equally dazzling Rolex Day-Date—his is a more fight-fire-with-fire strategy. Mahomes on the other hand might be hoping that his very classic watch can curb some of the heat coming off his ring—which, did I mention, has 255 diamonds and 36 genuine rubies?

As my colleague Rachel Tashjian covered as the molly-laced dust of the VMAs settled, celebrities are dressing like maniacs on red carpets again—nature is healing. While neon was the star of the VMAs, high-powered watches are another good sign that normalcy, or at least something vaguely shaped like it, is returning. Right on cue is Jaden Smith’s Rolex Datejust in yellow gold with a bezel lined with diamonds and more gems standing in as hour markers.

Maybe no one used their outfits in the bubble more powerfully than Chris Paul, who frequently wore clothes representing and bringing visibility to HBCUs. For good reason, the watches CP3 wore were an afterthought but they were consistently excellent. In addition to a more modern-looking stainless steel Royal Oak, Paul often wore this pink-gold version of the watch on a leather strap. While the watch was originally designed as a high-end take on a casual sports watch, the strap and precious materials reimagines this Royal Oak as a black-tie hero. The watch is as reliable a sidekick as Lu Dort.

A massive man like Schwarzenegger needs an equally massive watch. Luckily, Panerai specializes in exactly that, and this watch is a mammoth 60 millimeters (compare that to the new “bigger” Submariner Rolex unveiled this week which clocks in at 41 mm). It’s no coincidence that bigger watches were all the rage in the ‘90s when strongmen like Schwarzenegger and Sylvester Stallone were on top of the world and two of the most influential watch collectors alive. This particular Panerai is known as L’Egiziano, which is “the Egyptian” in Italian. The watch is based on a piece Panerai created for the Egyptian Navy in the mid-1950s. Near the 3 o’clock marker is Panerai’s cult-famous “8 Giorni Brevettato” stamp, which translates to “8 Days Patented” and refers to the watch’s eight-day power reserve (meaning that after a full wind the watch will keep ticking for eight days).

This week, Rolex presented a new line of Oyster Perpetual watches in unusual colors like pink, green, and yellow. These are fun but they don’t have much on the dials Rolex has put on the Datejust over the years. From the late ‘70s to early ‘90s, the brand would use intensely colored stones like lapis, malachite, and obsidian to create one-of-a-kind dials that looked like something you’d collect in a Zelda game. Here the Weeknd wears a Datejust with a dial made out of onyx. Unlike the other Rolex dials made out of semi-precious stones and minerals, the onyx pieces were distinctive because of their lack of hour or minute/second markings.

Racing watches have a funny habit of ending up on the wrist of pilots. Most famously, the Omega Speedmaster built with chronographs for the track ended up on the moon with Neil Armstrong and Buzz Aldrin. Turns out that exchange works both ways. This week, after winning Belgium’s F1 Grand Prix, Lewis Hamilton flashed his IWC Big Pilot watch. The Big Pilot was originally made, as the name implies, for aviators with similar models in IWC’s catalog dating back to the 1930s. The brand fished it out of the archives in 2002, gave it some updates, and it’s been a tentpole for IWC since. Now, the pilot watch is there to help Hamilton win car races. 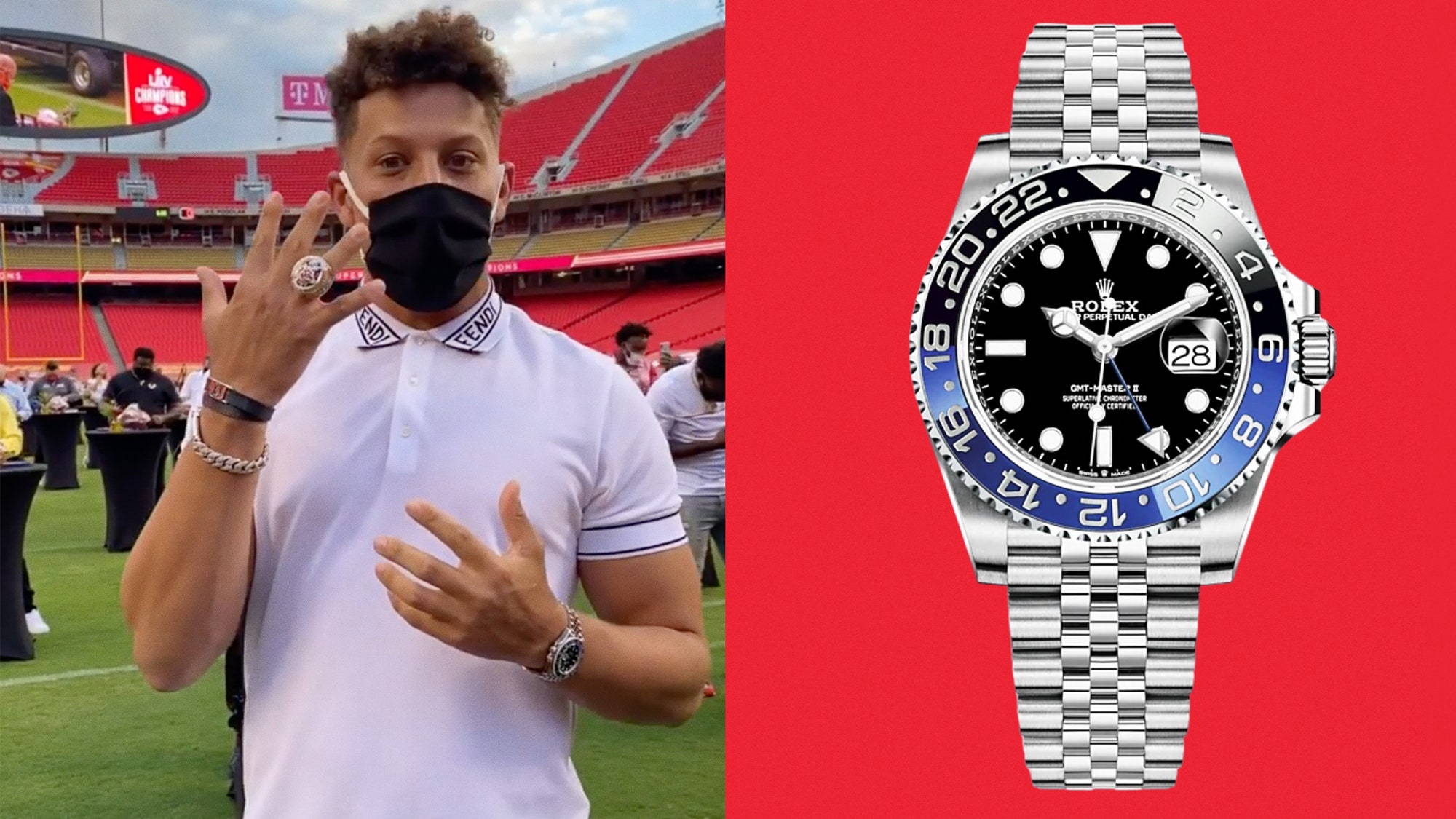