The first rule of getting involved with a Christopher Nolan movie is to not talk about the Christopher Nolan movie. That applies to its star actors, like Robert Pattinson, who told GQ that “Even if I had seen it, I genuinely don’t know if I’d be able to [explain it].” To collaborators who provided music for the film, like Travis Scott: “I can’t even explain it. You literally just have to watch it. It’s very fire.” And 18 months ago, Hamilton CEO Vivian Stauffer was also bound to secrecy when he started working on watches for the movie. Not only did Nolan’s brief require Stauffer and Hamilton to build an unprecedented and challenging watch, but to do so virtually in the dark.

“Nathan [Crowley, Tenet’s production designer] gave a call to us one day and said, ‘I’m working on a new project with Nolan—we are looking for a military watch and what we would like to have is a digital countdown in an analog watch,” Stauffer says. “Of course, he told us, ‘I can’t tell you the role of the watch or what it’s going to be used for. I can’t tell you anything.’” Stauffer accepted.

This is the third Nolan movie Hamilton has furnished watches for—they first paired up for 2012’s finale to the Batman trilogy The Dark Knight Rises and the Matthew McConaughey-starring space odyssey Interstellar. Being selected as the watch brand in a Nolan movie is a high honor. Maybe no director is more obsessed with time than Nolan, which means watches often play a more-than-stylistic role in his films. In Interstellar, McConaughey uses the Hamilton he gave his daughter to communicate with her through morse code. On their lasting relationship Stauffer says, “He knows we fully trust his way of using our products and that we have the flexibility to bring something together.”

What we do know about the plot of Tenet is that once again the concept of time plays a major role: special agents must manipulate it in order to prevent World War III. In the movie, the Hamilton watch is more than an accessory—it’s a vital tool used to prevent global catastrophe. That sounds important! “It’s not just aesthetic,” says Stauffer. “It really has a role, especially in the last 20 minutes of the movie.”

Certain trailers for the movie feature the watch as the movie’s potential breakout star. Big luminous digital numbers shown in both blue and red take up the entire center of the dial. They seem to be counting down or up or or forwards or backwards, hell, maybe sideways—who can say? (Because of contractual agreements: absolutely no one!)

The watch’s important role was a gift and a curse, though. More than any other piece Hamilton has supplied for Nolan, this one was by far the most complicated to create. Nolan needed an analog watch—meaning one with your classic dial comprised of hands and hour markers—that also had a very bright digital display. Hamilton didn’t have any watch in its catalog that met that criteria. So the brand took its military style watch, the Khaki Navy BelowZero, and found a way to integrate a digital screen into the dial. “It’s really something he wanted to film and not create by computer,” Stauffer says. The mechanical movement was extracted from the watch and replaced with a digital one. And the watch was given a battery strong enough to power the bright display. “Technically speaking, to be honest, I don’t even know how they made it,” says Stauffer. Hamilton eventually sent 25 to 30 watches to Nolan, all different enough to serve a variety of purposes throughout the movie. Some show different colors on the dials, others have the hour hands set to different places.

Stauffer is hopeful Hamilton will eventually drill down enough on the technology that the brand will be able to release a watch just like the one Pattinson and John David Washington wear in the movie. For now though, if you want the watch like the one worn by your favorite WWIII-preventing special agents, Hamilton has released a simplified version of the piece in the movie. The resulting piece is a black titanium Khaki Navy BelowZero that comes with either a red- or blue-tipped seconds hand.

The day before we spoke, Stauffer was finally able to see the movie. Working on a watch blindly, he admits, “can be a risk” but he left the theater happy with his team’s work. Still, despite providing an important piece of the film, he was left like many of the people who worked on Tenet. “I didn’t understand everything yet,” Stauffer says, “so I have to go back and see it again.” 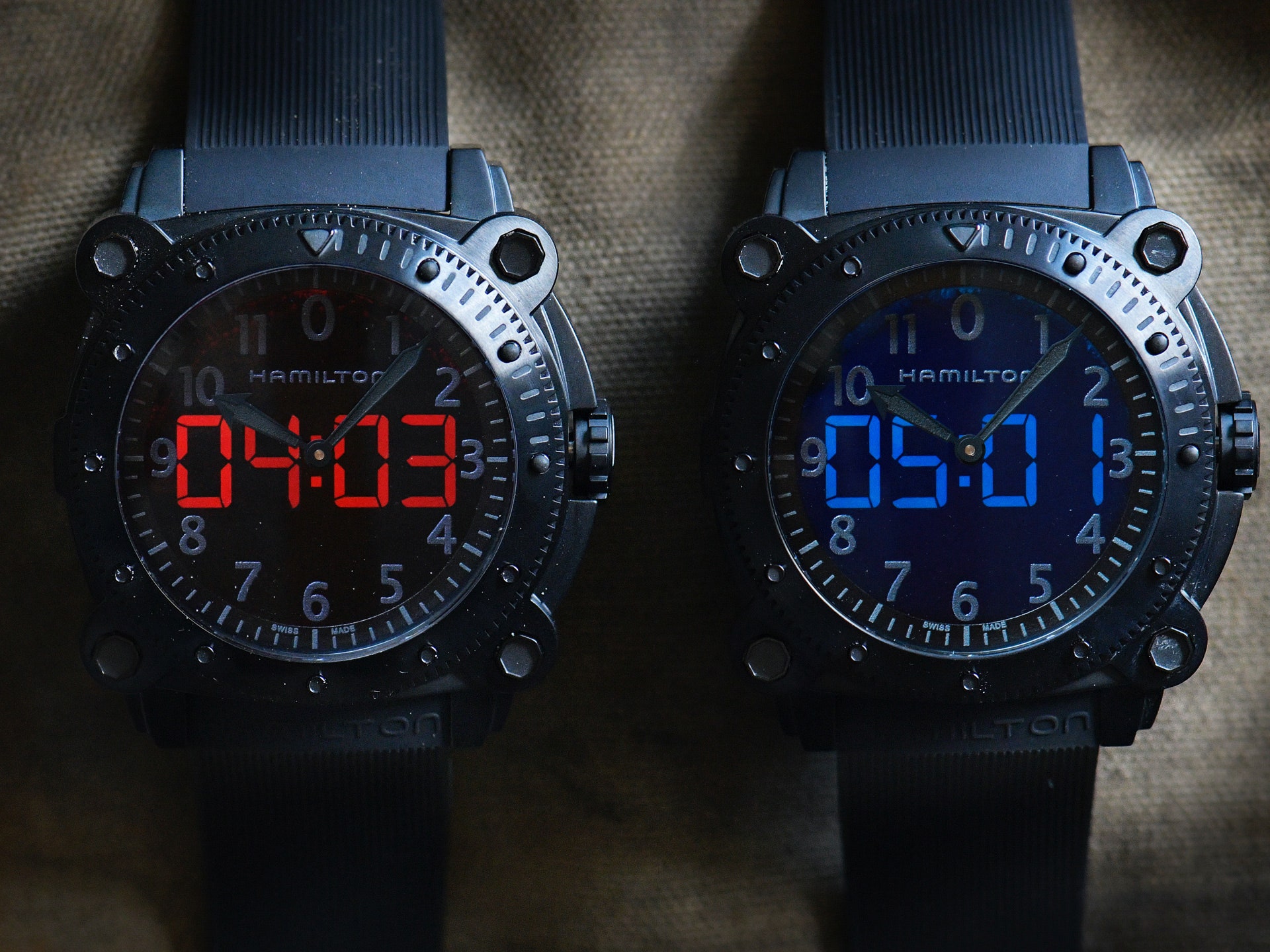