Has Jerry Falwell been in hot water about anything else recently?

Amazingly, before l’affaire Granda resurfaced, Falwell Jr. was already on administrative leave from Liberty university, following backlash from an Instagram photo he had posted. In the now-deleted image, his fly was undone, he was holding a beverage, and he had his hands around a woman (not his wife) whose midriff was exposed. It was tame by modern standards, apparently taken at a costume party—the kind that is probably not exactly in accordance with the Liberty Way.

What happened between the Falwells and Granda?

According to a report published this week in Reuters, Granda ended up being more than a mere business associate; he was intimately involved with Jerry and Becki Falwell, and provided Reuters with messages, screenshots, and other sundry RECEIPTS (emphasis added):

Giancarlo Granda says he was 20 when he met Jerry and Becki Falwell while working as a pool attendant at the Fontainebleau Miami Beach hotel in March 2012. Starting that month and continuing into 2018, Granda told Reuters that the relationship involved him having sex with Becki Falwell while Jerry Falwell looked on.

No kink shaming now. Says Granda: “Becki and I developed an intimate relationship and Jerry enjoyed watching from the corner of the room.” In an interview with Politico published Tuesday, Granda claims their first magical evening went down after Becki approached him during his work shift when she saw him chatting up some younger women.

“Becki said, ‘Those girls don’t know what they’re doing, you need someone with more experience.’

After chatting, Granda said, Becki suggested they go to a hotel room.

“And then she goes, ‘But one thing.’ And I’m like, “Okay.’ And she’s like, ‘My husband likes to watch.’ And just then he comes out and he’s wearing a Speedo.”

Okay, okay—so what was in it for Granda?

Aside from co-ownership of the illustrious Miami Hotel, a lavish lifestyle that included vacationing with the couple on their private jet, hiking trips, water skis, etc. At first, Granda says he entered the relationship willingly, but now feels like he was taken advantage of. “Whether it was immaturity, naïveté, instability, or a combination thereof, it was this ‘mindset’ that the Falwells likely detected in deciding that I was the ideal target for their sexual escapades,” he says.

And then things went south?

That’s one way to put it. Granda allegedly tried to untangle himself from the Falwells around 2015, when Falwell’s national profile rose after the Trump endorsement. In a statement to the Washington Examiner this week, Falwell confirmed the affair and went on to accuse Granda (who wasn’t named) of trying to extort them.

“It was like living on a roller coaster. While completely dedicating ourselves to Liberty, we were also suffering in silence during our personal time together, while simultaneously trying to manage and deal with this increasingly threatening behavior, which only worsened over time. We were doing our best to respectfully unravel this ‘fatal attraction’ type situation to protect our family and the university.”

A conscious unthroupling, if you will.

On Monday, reports circulated that Falwell Jr. was resigning from his post at Liberty U, then he reportedly reneged. As of Tuesday afternoon he has reportedly submitted his resignation, according to the AP. In any case, Twitter has been having a banner week so far:

Your next big fit starts in The GQ Shop. 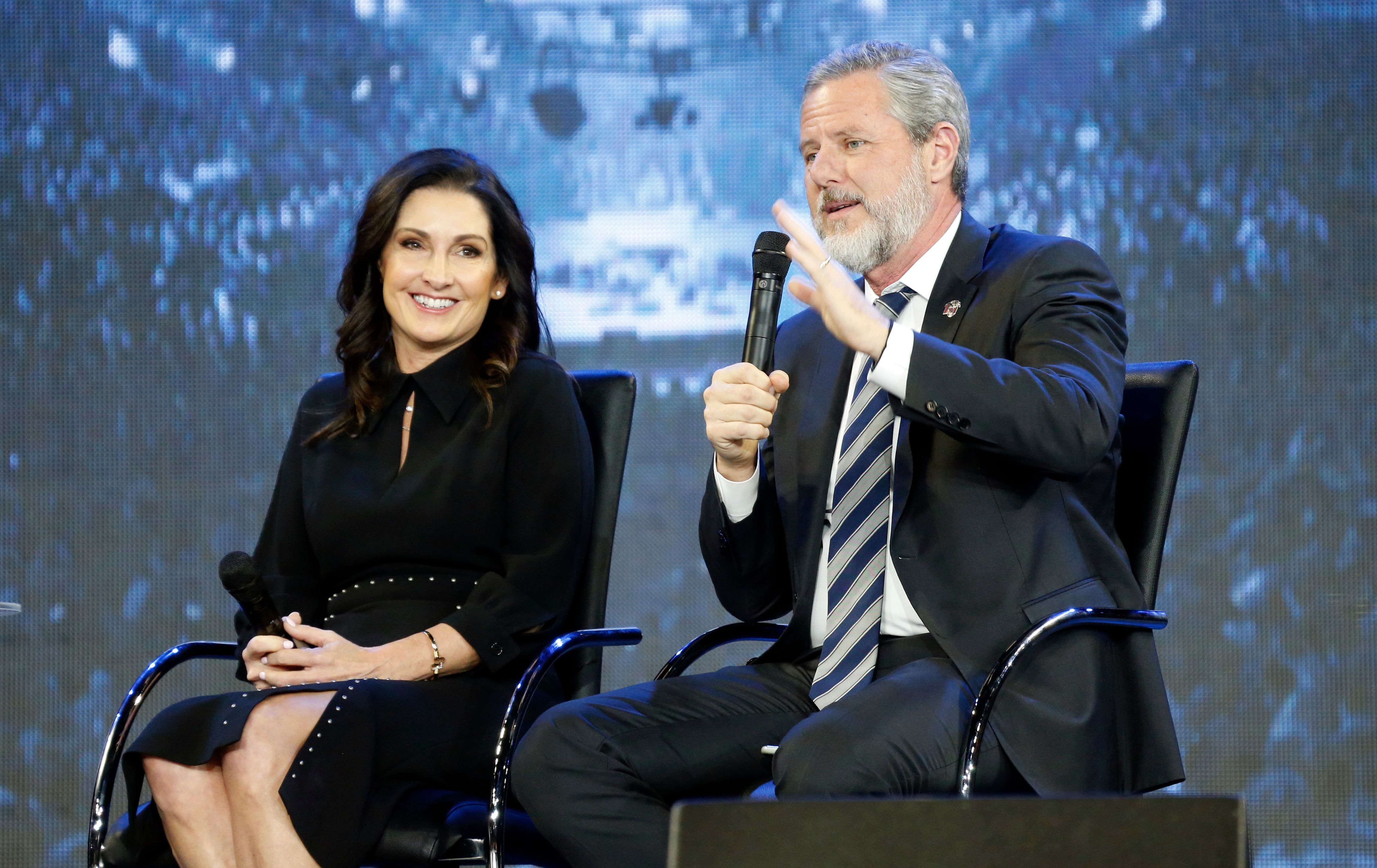